Giroud scores twice : In the last friendly game before the real deal against Germany next Tuesday, the french team had no real opponent but could have scored a lot more goals.

Griezmann, because of a not too tiring season with Barcelona, is the best player in the team right now. He proved this with a spectacular bicycle kick (29′). His good understanding of Pogba’s movement will be the key in France’s future success.

Mbappé played well with Benzema who had to leave before half time due to a minor injury. But he wasn’t very generous with Giroud who still managed to score twice (83′ and 90′). The parisian was surprisingly clumsy in front of the goal. 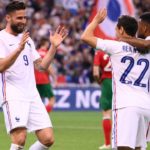